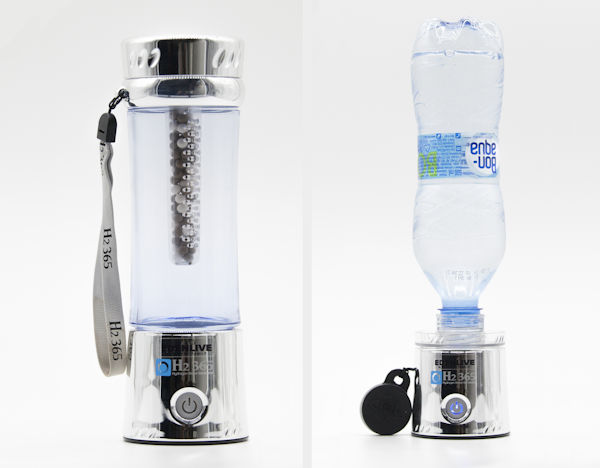 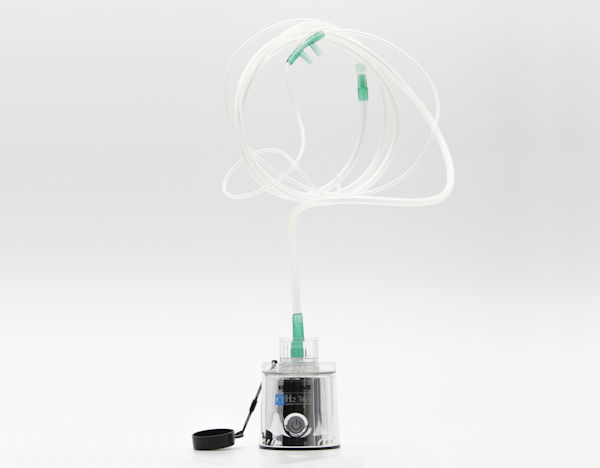 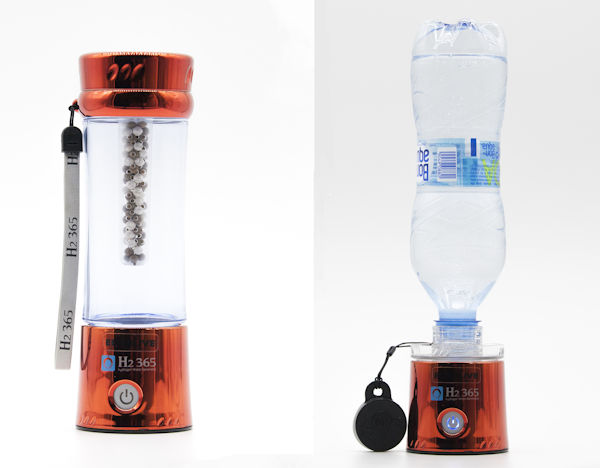 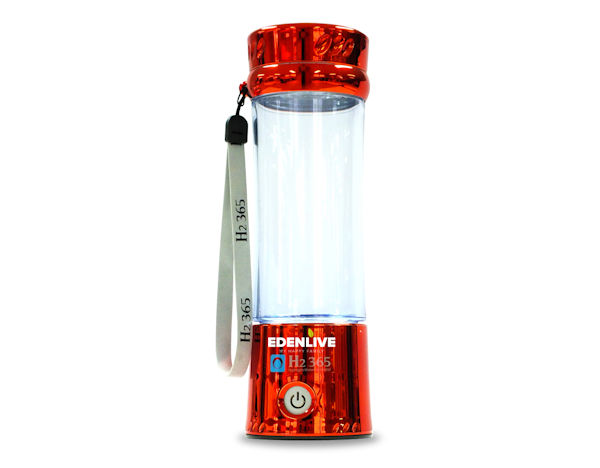 In 1992, in the German village of Nordenau, water was discovered in the slate tunnel in front of the Tommes Hotel, which helped people make a quick recovery from various illnesses. People began calling the water “Wunderwasser”, or “miracle water”.

However, the Hygienic Institute in Gelsenkirchen was unable to explain why this water causes such miraculous results and helps people make quick recoveries from various illnesses. After all, the water wasn’t extraordinary in any way. Thus, they submitted the water to be analysed by Prof. Shirahata of Kyushu University (Laboratory of Cell Regulatory Technology). There a revolutionary breakthrough was made. The professor discovered that the water from Nordenau was different from ordinary water in that it contains “active hydrogen”, or rather it is carbonated with molecules of hydrogen H2. This discovery launched an avalanche of research of the effects of molecular hydrogen to our health. The biochemist Albert Szent-Gyoryi, winner of the Nobel Peace Prize, once stated that hydrogen is the fuel of life, and not oxygen, as is generally believed. He also showed that, to a certain degree, our body stores hydrogen, doing so mostly in the liver. The liver requires hydrogen to neutralise free radicals during our organism’s purification process from toxins (detoxification). This was confirmed in 2001 by a group of researchers. They discovered that when they kept animals in an environment rich in hydrogen, these animals were distinctly protected from harm to the liver. More research then revealed that the inhalation of 4% hydrogen significantly protects the brain from a stroke.
US Army documents further displayed that the effects of molecular hydrogen protect against radiation damage to the cells and help to heal cells. It was discovered that our body needs hydrogen, and as soon as we inhale, hydrogen from the air is immediately absorbed and used by the cells and tissues of our body. Hydrogen carries negative ions and vigorously alkalises our overaciated body. This is why we always feel better by the sea, while the surf continuously releases negative ions into the air, many of which contain hydrogen. Apart from the exceedingly important alkalinization of our body, scientists also discovered an array of other phenomenal effects of molecular hydrogen for our health, including:

Another researched-based breakthrough was made in 2011 by Sanetaka Shirahata and his team: Hydrogen molecules activate the gene responsible for the production of antioxidant enzymes, such as catalase, glutathione peroxidase, and heme oxygenase-1, which cells otherwise produce when needed. If we relate the effects of hydrogen to the problems we have described so far, it is evident that hydrogen can help solve the causes of a massive number of health problems. It quenches inflammation, accelerates healing, slows down ageing, detoxifies the body, etc. The best thing about hydrogen is that its molecules are so small (0.24 nanometres - the smallest in the universe) that they penetrate areas that no other antioxidants can activate. They therefore provide protection both outside the cell and inside the cells. They penetrate unhindered to the cell nucleus and thus protect DNA. They even cross the blood-brain barrier in the brain and protect our brain from free radicals, inflammation and toxins. By its nature, hydrogen alkalises both the entire tissue and the interior of the cell. An environment with the right pH is hostile to all inflammations as well as all pathological bacteria and parasites. This works directly against pathological manifestations, including cancer. Thus, it can be said that hydrogen outperforms all known antioxidants. Our body is unable to produce hydrogen. However, researchers have found that under normal circumstances, E. coli produces about a litre of hydrogen per day by fermenting indigestible carbohydrates. However, our tragic lifestyle causes us to need hydrogen more (we have many more free radicals and inflammations that the body is fighting) and the intestinal flora produces it less (E. coli bacteria have little natural nutrients to do so).

Is the use of molecular hydrogen safe?

How can you get the benefits of molecular hydrogen inside the body? Scientists have tried various methods for how to secure the positive effects of hydrogen in the human body: Inhalation, bathing in hydrogen enriched water, injections of enriched water, droplets of enriched water for the eyes, and supplementing the intestinal flora with the necessary bacteria. The methods of inhalation and bathing quickly spread in places such as Japan, where the people often partake in these activities. Nevertheless, these methods can be quite financially burdensome, or they require that you travel to some place that has these expensive facilities available.

Since then, the most ideal solution has been discovered. And that solution is drinking water enriched with molecular hydrogen. The world-renowned invention, the PEM membrane, is part of a generator for carbonating any kind of water with molecular hydrogen. Currently, there are two types that can be purchased for personal and home use, or for use in offices, doctor’s offices, companies, etc.

Molecular hydrogen is such a powerful antioxidant that its effects can be seen all over the body, all the way to the brain, just as with the water from Lourdes. It binds pathogens, or free radicals in the body, and thus repairs cells.
The hydrogen-carbonated water generator treats drinking water and helps to improve health.

Modern lifestyles, polluted environments, stress and an unsuitable diet cause many harmful substances to accumulate in our bodies. If these toxins are not removed in time, they can cause harm to the body and mind and accelerate the ageing process of our internal organs. Purification is the removal of toxins from the gastrointestinal tract, bloodstream, lungs, skin and other organs, so that they can function properly.

With your own personal hydrogen generator you can drink hydrogen-carbonated water anytime and anywhere.

Thanks to this membrane you can easily carbonate any ordinary water, water filtered by osmosis and distilled water – with as much as 900-1200ppb hydrogen!!

Despite the high content of dissolved hydrogen and the reduction potential up to ORP -400 mV, a neutral PH is maintained !!

Easy charging via USB
Certified as a hypoallergenic product.
Effective hydrogen-carbonated water for use in healthcare and cosmetics !!
It ensures a hydrogen concentration of 1000 ppb after only 2 minutes of use.

Automatic electrode cleaning function - protects the electrodes to ensure maximum concentration at all times.
It can be used for all types of drinking water (the system uses the new concept of the PEM polymer membrane, so both distilled water and water purified by reverse osmosis can be used).

High reduction efficiency - oxidation-reduction potential (ORP up to -450 mV). Environmentally friendly container material - No need to worry about the release of environmentally harmful hormones
The device is automatically activated every 10 minutes to prevent the hydrogen concentration from falling, meaning you always have water with a high hydrogen content.

Although these ionizers produce negative ORP values, this does not mean that the ionized water has a high hydrogen content. In fact, some water ionizers are capable of producing high alkaline pH and therefore “produce” some hydrogen from production, but the concentration of hydrogen in the water may be less than 0.05 ppm (50ppb), which is below the lowest therapeutic level. Therapeutic effects come from molecular hydrogen dissolved in water and not from an increase in pH.

Hydrogenated water obtained by electrolysis (passage of an electric current through water) is the most suitable method for the easy and safe recovery of molecular hydrogen into water. Electrolysis divides a molecule of water (water) into atoms (O2 and H2) and dissolves them in water. The advantages of hydrogenated water are derived from the dissolved molecular hydrogen (H2) in water.
Hydrogen water is characterized by being rich in hydrogen H2 (1000ppb) and it has a negative oxide reduction potential (ORP), which can act against negative reactive oxygen (oxygen ions, free radicals and peroxides both inorganic and organic).
Hydrogenated water is a natural and harmless antioxidant that improves our health, prevents disease, promotes the hydration of our cells and slows down ageing.

Living objects are extremely sensitive to pH and work best (except for some parts of the digestive system) when the solutions are almost neutral. Most cells in our body (except the nucleus cell ) have a pH of about 6.8. Blood plasma and other fluids that surround the body’s cells have a pH of approximately 7.3. The importance of pH is such that there are numerous mechanisms that help stabilize body fluids, so that cells are not subject to significant pH fluctuations.
The WHO (World Health Organization) recommends the optimal pH of the water we drink to be between 6.5 and 8, and it is not advisable to drink water outside this range! The reason being a question of balance. Water that is too acidic or too alkaline can be harmful to human health and lead to nutritional imbalances. This has been proven by research. PH is thought to have a significant effect on the mitochondria of cells (organelles whose main function is cellular respiration and energy production), so that normal cells die in a high alkaline environment (increased cellular pH), due to altered mitochondrial function. Hydrogenated water has an almost neutral pH (between 7.2 and 7.9, similar to our body). Although not alkaline, it is very active because it fights the acidity of our body while fighting its root cause, which is oxidation.

There are ionizers that produce two types of water (such as Kangen): alkaline water (for drinking) and acidic water with a pH of 11.5 (for disinfection and sterilization). The second substance is obtained mainly from hypochlorous acid - chlorine gas and ozone - which occurs in the electrolysis process when it affects chloride ions.

Thousands of people have spent money to drink the miracle waters of Lourdes, France. This water is extraordinary thanks to its hydrogen content - maximum of 800 ppb. Now, all it takes is two minutes for you to make your own hydrogen-carbonated water with a minimum content level of 900-1000 ppb. The water’s PH does not change, and the water is rich with hydrogen and minerals. You no longer need to travel to France once a year to get your hands on miracle water. The EDENLIVE company offers a hydrogen-carbonated water generator, which you can use to drink miracle water every day of the year!

What is a hydrogen-carbonated water generator?

In what way is hydrogen-carbonated water different that ordinary water?

Why should I drink hydrogen-carbonated water?

JAKUB IBL: THERE IS A LOT OF BLOOD AND INJURY IN MY SPORT, SO IT’S IMPERATIVE THAT I MAINTAIN A DRINKING REGIME, AND I DO SO WITH HYDROGEN-CARBONATED WATER

Molecular hydrogen has positive effects on the following health problems: